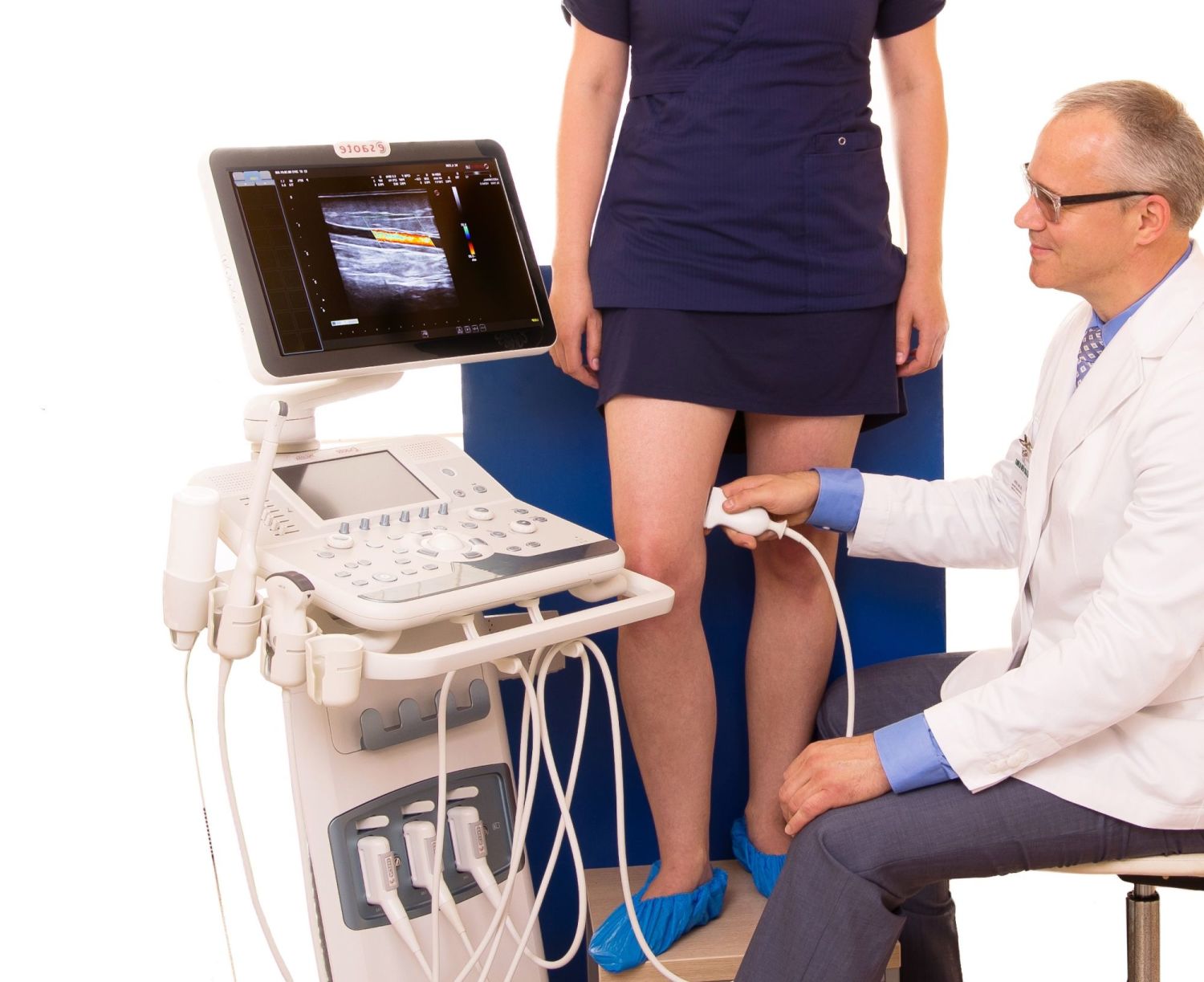 Phlebologist is a physician, who diagnoses vascular diseases, develops therapy plan for the therapy of venous, lymphatic insufficiency, in the events of trophic ulcers, as well as eliminates aesthetically disturbing pathologies.

During the visit, the physician shall collect the history – most frequently asked questions refer to the specific nature of patient''s work, lifestyle, physical activities, harmful habits and heredity, which can promote the development of venous diseases. While patient is standing up, the physician will evaluate the size and localisation of varicose veins, oedema in the ankle region and appearance of skin, as well as measure the circumference of the leg. Meanwhile in sleeping position, the trophic of the skin, oedemas, appearance of trophic ulcers, localisation thereof will be evaluated.

Palapation of the pulse on the arteries of the feet, popliteal and inguinal area is important. Usually, the specialist will perform duplex ultrasound examination of the blood vessels during the examination, which is considered to be a golden standard of vein examination.

After the determining of the diagnosis, the physician offers the most appropriate and gentle solution, considering the form of the disease and financial resources of the patient.

If trunk veins are well, but only lateral branches are impaired, or the network of small capillaries is disturbing, the problem can be eliminated within tens of minutes, without surgical intervention and by means of different methods (sclerotherapy, intensively pulsating light devices, special vascular lasers, radiofrequency devices, etc.).

It is important to remember that the result of therapy can be reached only by complex approach to the problem – starting with precise diagnostics, adequate and minimally invasive therapy and completing with active rehabilitation and long-term observation of the patient.

Baltic Vein Clinic (BVC) of the Veselības centrs 4 is still the only medical institution in the Eastern Europe, where all these internationally recognised therapy methods are available in one place. Furthermore, they are used with very high success rate, by selecting the most appropriate for each patient.

Certain forms of varicose disease, where, for instance, the branch of the vein is varicose, but the trunk part of a large vein is not impaired, can be treated by using foam sclerotherapy, which is also performed under ultrasound control. It can be used, if the diameter of the vein does not exceed 1 cm. During the procedure a foamed medication, which breaks down the internal layer of the vein, is injected into the vein, as a result of which the vein closes. After the procedure, the patient may walk home. Furthermore, anaesthesia is not required during foam sclerotherapy. The procedure can be performed irrespectively of patient''s age and overall health status. In comparison to other methods, foam sclerotherapy is approximately ten times less expensive and therefore – accessible to a wider range of people.

* Approvals issued by the US Food and Drugs Administration (FDA), pursuant to the assessment of the data of three clinical trails of VenaSeal system sponsored by the manufacturer. Since consumer protection system of the USA ranks among the strictest in the world, this international recognition has a very high level of credibility.

The service is available in the following branches

Prices on the list are provided for information purposes only. Prices may also be changed without notice several times a year. Price variations between “Veselības centrs 4” branches and jointed companies may occur. For detailed price information please see listings of each branch and jointed company separately.